Hydro-SDK is a software development kit (SDK) enabling Flutter developers to write portions of their app (or their entire app) using TypeScript. It is a project with one large, ambitious goal. "Become React Native for Flutter".
It aims to do that by:

In this article I want to announce and describe the realization of goal 3. 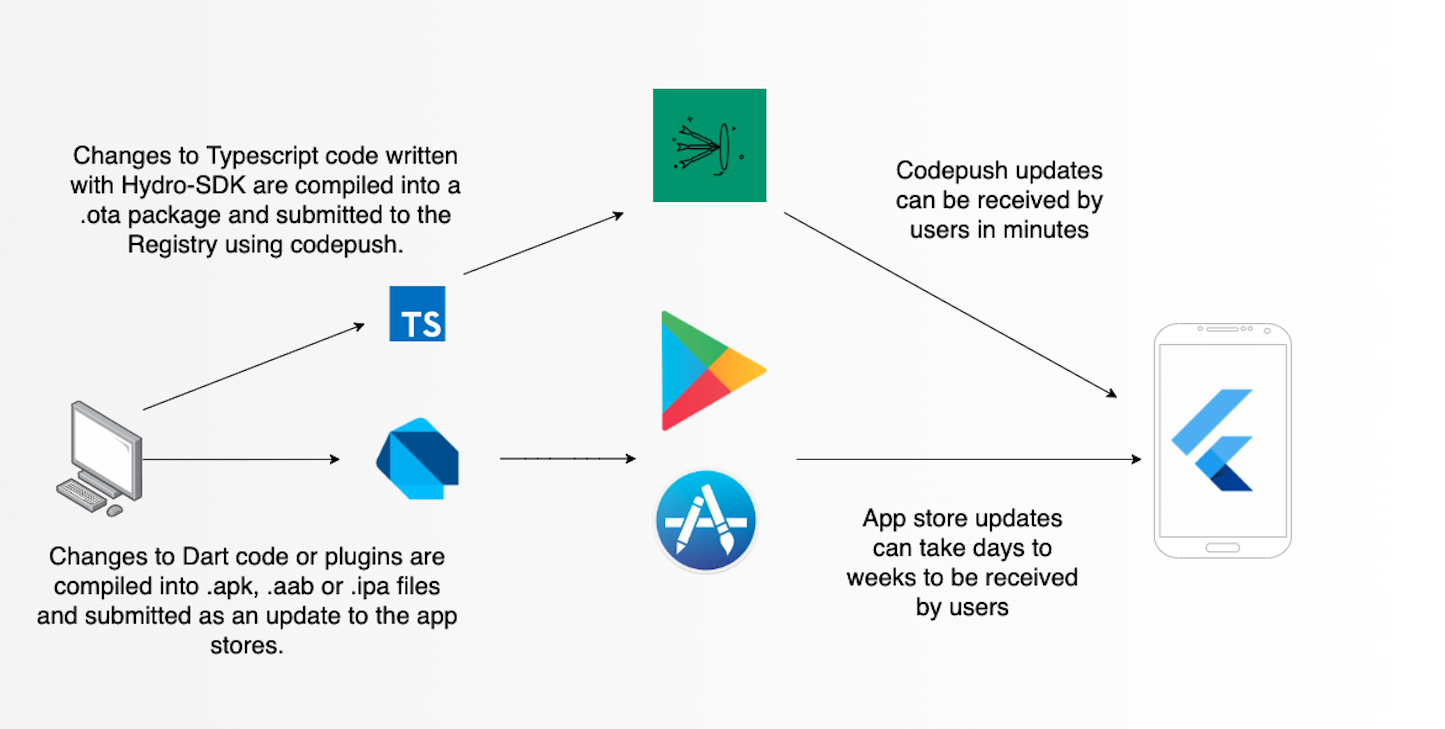 Registry is a service for publishing and delivering .ota (over-the-air) package files produced for Hydro-SDK components.

Hydro-SDK builds and manages code in terms of projects. Projects consist of components. Hydro-SDK content is embedded into a host app using the RunComponent widget. While developing with Hydro-SDK locally, the RunComponent widget and hydroc run command work together to rebuild and hot-reload your code as you make changes. See the getting started tutorial for a full description.

This is great when developing locally using Hydro-SDK. What if your entire app isn't written with Hydro-SDK? What about developers writing Dart code in an app where Hydro-SDK is only a small part? Should they have to worry about having hydroc run running? What about end users of your app? This is where the Hydro-SDK Registry comes in.

The Hydro-SDK Registry is available at https://registry.hydro-sdk.io In cases when hydroc run is not available during local development or when your app is running in profile or release mode, the RunComponent widget will look to the Registry for the latest available package for a given component.

Registry is completely free and connects with your existing Github account. See the codepush tutorial.

There is endless discussion on every corner of the internet dissecting and debating App Store rules and guidelines. The Hydro-SDK counter app showcase has been successfully published to Google Play. An App Store version is in progress.
Google Play: https://play.google.com/store/apps/details?id=com.hydro_sdk.counter_app
Registry: https://registry.hydro-sdk.io/#/component/63bbc0f5-0080-439c-999e-2323462beede

Like Hydro-SDK itself, Registry is still in an incredibly early stage. We are looking for members of the community to try Hydro-SDK, Registry and codepush and provide their feedback and experience. Consequently, there is no official service level agreement (SLA) at this time. Please reach out on Github issues, Github discussions, Discord, or email us at "hello (at) hydro-sdk.io".

For a large part of Hydro-SDKs existence, it has been licensed under the GNU Affero General Public License Version 3 (AGPL-3). This was done in order to make it harder for companies to take the open-source Hydro-SDK and monetize it by providing value added services (like codepush) around it. Starting from Hydro-SDK 0.0.1-alpha.0 and 0.0.1-nightly.289, Hydro-SDK will be licensed under the far more permissive MIT license. If you're a business or other entity for which the MIT license does not meet your needs, please reach out at "hello (at) hydro-sdk.io".

The only state management technique available to code written with Hydro-SDK is setState. There is a hand-written port of package:scoped_model in the Hydro-SDK source distribution though it is not quite polished enough to recommend it for use in any official tutorials or guides.

The APIs currently available from Hydro-SDK can be viewed on https://hydro-sdk.github.io/hydro-sdk/ It is quite limited in comparison to what dart:* standard libraries and package:flutter have to offer. Not to mention packages from pub.dev. Hydro-SDKs SWID project aims to build tooling to automatically make public APIs from Dart packages available to use from Hydro-SDK. SWID is still in its infancy. However, classes from Flutter like Material icons and Cupertino icons have been brought to TypeScript and Hydro-SDK users thanks to SWID. The entire dart:typed_data library, and extremely complicated classes like Iterable from dart:core have been made available thanks to SWID. The code that SWID produces is correct enough to pass test cases from Dart's library conformance test suite (CO19) that have been ported into TypeScript.

Hydro-SDK aims to become a toolkit to extend Flutter not just to TypeScript but to other languages like Haxe and C#. SWID is the cornerstone of this vision. Making SWID smart enough to handle dart:ui is next and can be tracked here. All work related to SWID can be tracked here.

Hydro-SDKs build system takes in TypeScript code and produces Lua bytecode to be run on the common Flutter runtime (CFR) virtual machine on a host Flutter app. Other than stripping debug symbols when building for release mode (which commands like hydroc codepush do automatically), no ahead of time optimizations are done.

There is a lot of low hanging fruit to be picked in this area. Lua bundle collapsing (in a similar manner to the optimization performed by Browserify) in particular could realise some immediate size savings in terms of generated bytecode.

The most impactful optimization that can be done at the TypeScript level is tree-shaking. Bytecode produced by Hydro-SDK tends to be dominated by Material icons, Cupertino icons, Material colors and the like. Tree-shaking could remove this unneccessary overhead in bytecode size.

Wang, Williams et al and Kawahara have all performed extensive research into applying traditional ahead of time optimization techniques to Lua bytecode. Others like Shroder have explored runtime optimizations. In the future, finding a combination of these approaches and techniques will allow users of Hydro-SDK to deliver the smallest possible bytecode updates to their users

Tooling exists to compile Lua bytecode into Dart code that can then be compiled with a host app and recognized by CFR at runtime. This capability is tested on every commit as part of Hydro-SDKs CI in both debug and release modes. This feature holds a lot of promise at improving the performance of CPU bound operations that would otherwise be performed in bytecode. The benchmarks, tooling and other polish required to make this feature available where not ready for the 0.0.1-alpha.0 release.

Public Domain Publishing has been a generous sponsor of Hydro-SDK. Monetization goals include having enough recurring income to allow the primary developer to work full time on Hydro-SDK and to hire or otherwise compensate other members of the community who contribute to Hydro-SDK.

Hydro-SDK can be sponsored on Github Sponsors and Open Collective.

If you're a business looking for consulting or other services related to Hydro-SDK, email us at "hello (at) hydro-sdk.io".

Very preliminary planning has begun for 0.0.1-alpha.1. This work can be tracked here. Please reach out on Github issues, Github discussions, Discord, or email us at "hello (at) hydro-sdk.io" to help drive the direction of Hydro-SDK. Code contributions and pull requests are encouraged and accepted.